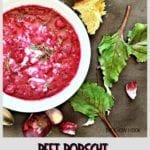 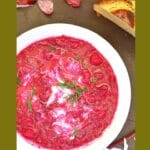 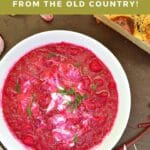 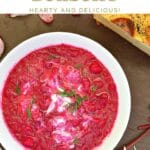 Beet borscht, made sweet and sour style with cabbage and potatoes, may be from the Old Country, but it is just as savory and delicious today! 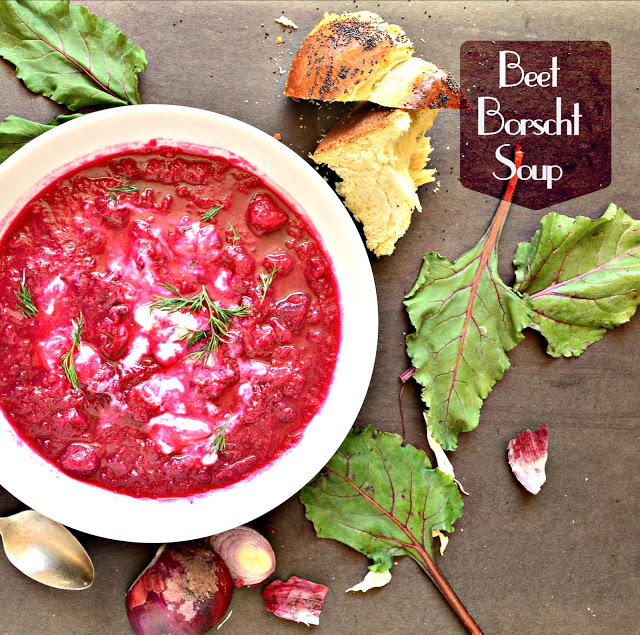 I don’t know what made me make this blazing red beet borscht. As a child I turned my nose up at it. I don’t even recall a spoonful of this passing through my lips or even close to them.

It’s only in my adult years that I discovered that beets are pretty good. Yes they are very red, but they are pretty good and very pretty in all their colorful forms, be it  gold or candy striped.

Maybe it is nostalgia that made me make this. Maybe I just had to see for myself what this borscht was all about.

I will always recall the jar of beet borscht from Manischewitz,  kept in our fridge, specifically reserved for when my father came home for lunch; not that any of us kids would touch it. He ceremoniously poured it into a bowl and topped it with a dollop of sour cream and slurped away while reading the Chicago Tribune. Beet borscht, whether served warm or cold was a staple for him. 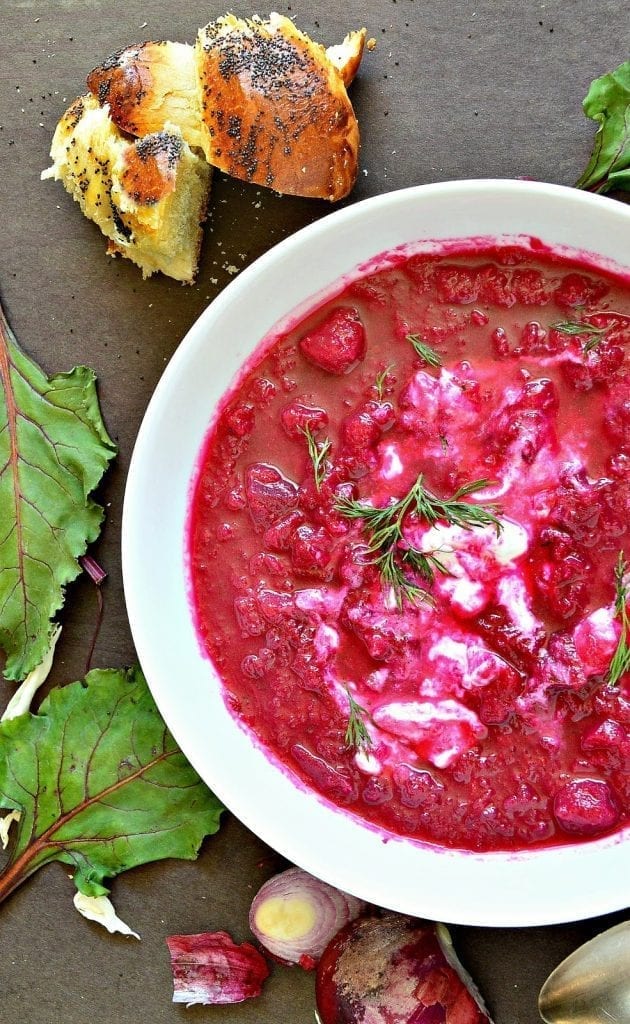 I’m not sure I’ve told you that my father came from Lithuania in 1938 when he was 7 years old, aboard the Normandy, with his parents, brother and sister, while narrowly escaping the demise of their village. Most of the family was not so lucky.

My father is from the OLD Country-as he puts it- where I guess they eat food like red borscht. And potatoes. Cabbage and bread.

And my father had no toys! (So he always told us.) As a child I thought Lithuania must be a very cold place, because when I stared at the family passport photo, everyone wore heavy coats.

The Vineris family came to Ellis Island in August when wearing a coat must have made them quite hot, but let’s just say they wore their belongings.

I presume they ate their beet borscht cold-because borscht can be had both ways. Neither was very appealing, to say the least, when I was a wee one. 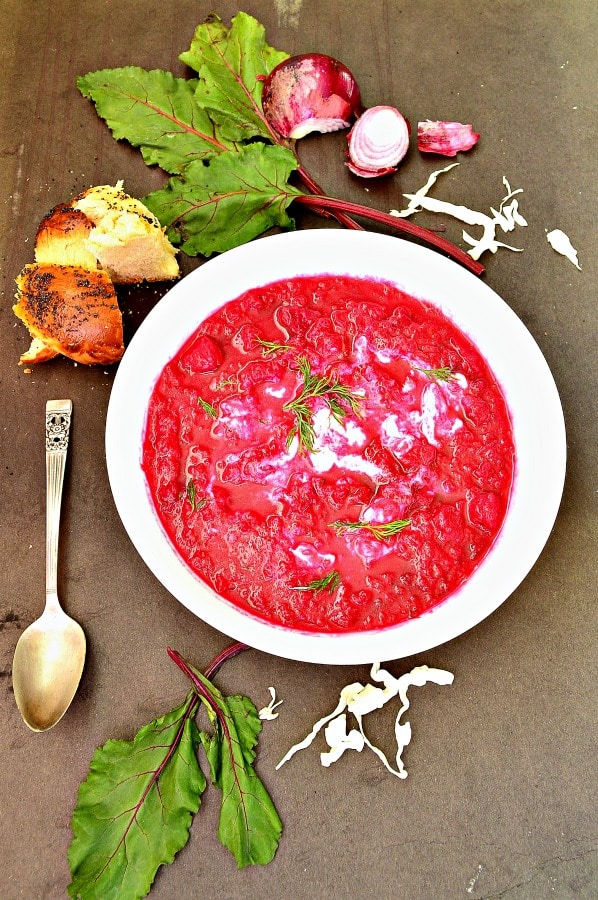 My mother told me that she used to prepare borscht for my father using meat-probably short ribs or brisket-but my mother has a thing for short ribs.

She told me she actually copied a beet borscht recipe from a Time Life cookbook that had gorgeous photos and at the time was too expensive for her to buy. Now I am curious what this book may have looked like, so I’ll have to peruse Amazon and see if I can snag a few copies.

So I made this borscht soup while baking hamentashen, which makes me quite the Bubbe, I think. Even though I am far from being a Bubbe;  my own Bubbe had 8 grandkids at my age-the oldest being moi.

I never ate her borscht either-but I do remember eating sugar cubes that were hiding in her cupboard. 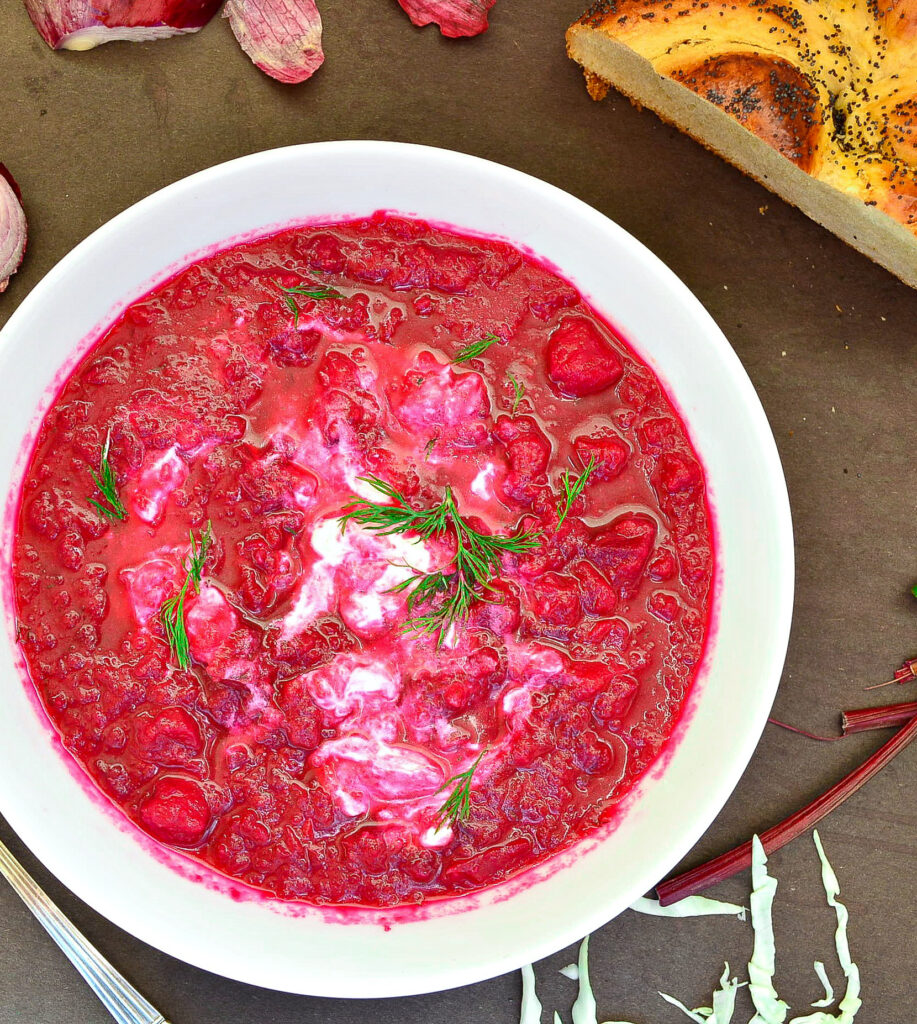 I asked if he’d like a spoonful and he politely replied, ” That’s OK. I’ll pass”. Ah, I thought-more for me- which is what my mother probably said years ago.

And so it is, I made my first bowl of vegetarian beet borscht. I still can’t imagine eating it cold, but nothing beats a bowl of hot borscht on a cold day.

I may not be from the Old Country, but I’m proud to say that peasant food or not, those Bubbie’s knew what they were doing. Using staples available to them, they came up with a soup that has withstood time.

Thank goodness I’ve finally made it. I hope my kids don’t wait so long. 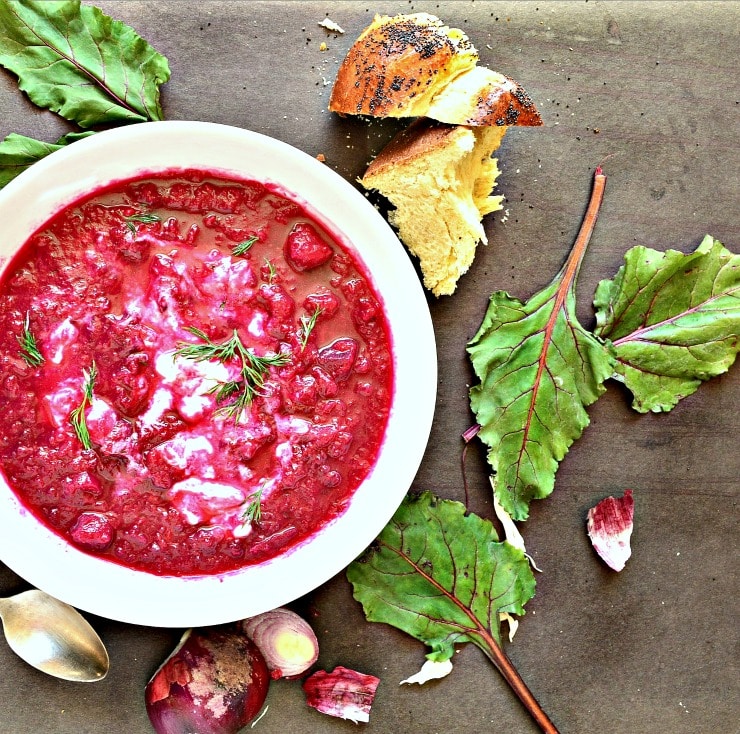 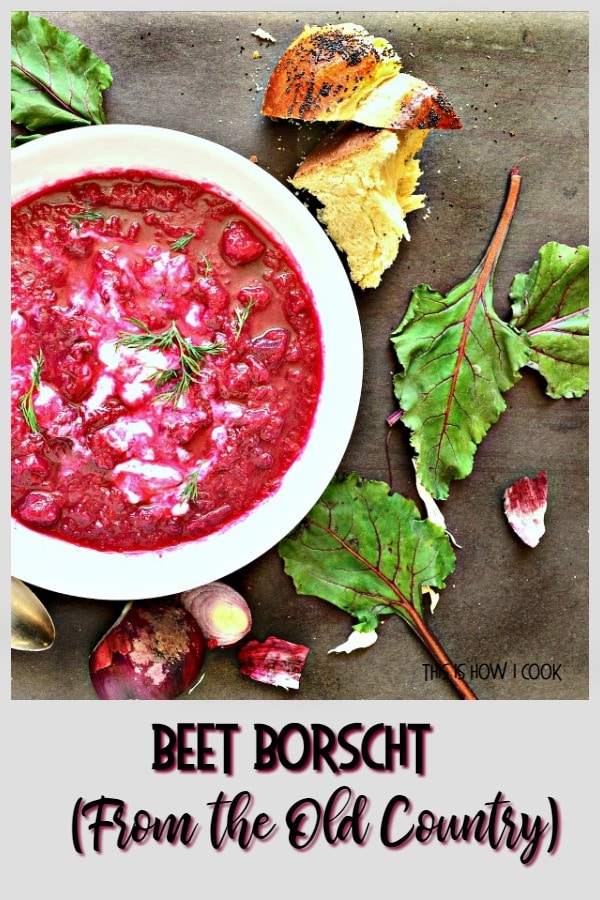 Beet borscht, made sweet and sour style with cabbage and potatoes, may be from the Old Country, but it is just as savory and delicious today!

1 large carrot, peeled and sliced into 1/2” thick half moons

1 T of honey or to taste

If you are using the caraway, toast it in a small skillet over medium heat until lightly colored. Set aside. (I don’t like caraway, so I don’t use it.)

In a large heavy bottomed pot, combine beets and 1/2 t salt with 4 c of stock and bring to a boil. Reduce heat and simmer, partially covered, until the beets are tender, about 10 minutes. Add the potatoes and continue to simmer until the veggies are fork tender. Using a slotted spoon, transfer veggies to a medium bowl and set aside. Reserve cooking liquid.

In a heavy bottomed soup pot, heat the butter over medium heat. Add the onions, stir to coat with oil and saute one minute. Add the caraway-if using-1/2 t salt and saute until onions are translucent about 5 minutes. Add celery, carrots, and cabbage. Add reserved cooking liquid and bring to a boil. Reduce heat and simmer until the vegetables are fork tender, 10-15 minutes. Add the reserved potatoes and beets, dill to taste, vinegar to taste, lemon juice, honey, tomato puree and raisins, if using. Season with salt and pepper.

Uncover the pot and simmer slowly for 30-40 minutes. Add more stock if mixture gets too thick. Taste and adjust seasonings, adding more vinegar to taste. Serve in bowls, with a big hunk of bread and garnish with sour cream and dill.

Beautiful! I also used to hate beetroot soup (and beetroots in general) as a child, but now certain dishes from my childhood bring back memories and my palate is no longer so narrow-minded. Thank you so much for sharing your family history. Dishes with personal history are so much more precious, even for complete strangers... Wonderful touching post. And such a delicious-looking dish!

I loooove borsht! I love the bright color, I love all the veggies, I just can't get enough. But I rarely make it; I'm going to remedy that soon and try this!

Abbe, such a vibrant and colorful soup! Recipes from the old country are such treasured parts of our family's memories!

I had to laugh at your comment to your mom :) I guess we'll always be children in our mother's eyes. What a beautiful soup and I'd say I've grown to love beets but certainly didn't when I was a kid either.