Quinoa
(keen-wah) was on my table the other night. That and cauliflower salad. I was satisfied
with both but my husband wondered where the rest of the meal was. You know-the
protein? I tried to explain that quinoa had plenty of protein for his dinner
and I had added chicken to it, too. But you can’t take a man away from his
protein. Especially those that need to be sliced.

Quinoa is
a seed. A very healthy seed. It has been on the radar screen for years but the
last few years it is finally getting its due. It is considered a complete
protein with 6g per cup, has lots of fiber, some calcium and lots of iron. It can be prepared
like rice and makes a great cereal, too. Prices are dropping as it becomes more
popular. I encourage you to give it a
try at least as an alternative to other starches in your diet such as
rice, potatoes, or pasta.
Little
did I know until I started looking up facts for this post that the United Nations
has declared 2013 the year of quinoa. Not that I put much stock in the UN but I
think they made a good choice here. And at least they took a stand on
something. Quinoa was considered by the Incas to be the mother of grains and
was considered sacred. When the Spanish and Portuguese colonists came over they
stopped the Incas from growing quinoa and introduced wheat. At the same time
they introduced the spice cumin and that is how cumin became popular in Mexican
food. (I had always wondered how it travelled from the Mediterranean.)
Leave it to the colonists!
I served
my husband what I will call a Mexican style quinoa. It can be eaten warm or
cold and is simple and quick to prepare. Feel free to serve it as a side dish
and leave out the chicken. Next time I will just plop that breast right on top,
front and center, and I know I will hear no complaints. He liked it. He just
missed using his utensils. Poor baby! 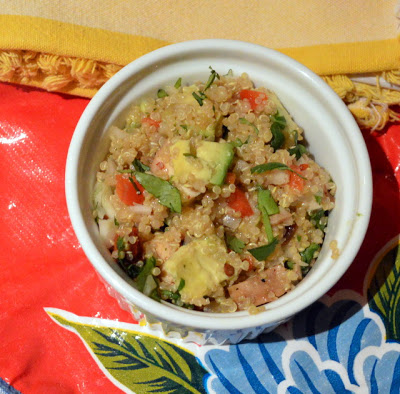 Mexican
Quinoa
1 c
quinoa
2 c
chicken or vegetable broth
1 smashed
clove of garlic
½ of a
red pepper diced
½ of a
can of green chilies or Hatch chilies
½ an
onion diced
½ an
avocado cubed
2 T
cilantro
½ t cumin
or more to taste
1-2
chipotles packed in adobo chopped
1 grilled
chicken breast sliced and cubed (I used leftovers from my Banh Mi)
Bring
chicken or vegetable broth to which the garlic clove has been added to a boil.
Add quinoa. Reduce to a simmer, cover and cook until seeds are translucent and
have spiraled out. This takes about 15-20 minutes. Liquid should be absorbed
but if it isn’t and the quinoa is done then just drain your quinoa.
Now- stir
in the rest of your ingredients. You may or may not need salt. That is it.
From
Banh Mi’s to Mexican style quinoa-yes-This is how I cook! 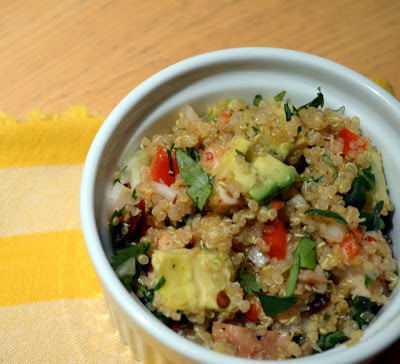 Thanks Meirav, and I agree Natalie. The avocado really makes it!