Barbequed Shrimp isn’t made on the grill. It’s made on the stove with lots of garlic and pepper and butter. This shrimp eats butter like I eat this shrimp. The best part is it’s ready to eat in less than 20 minutes! 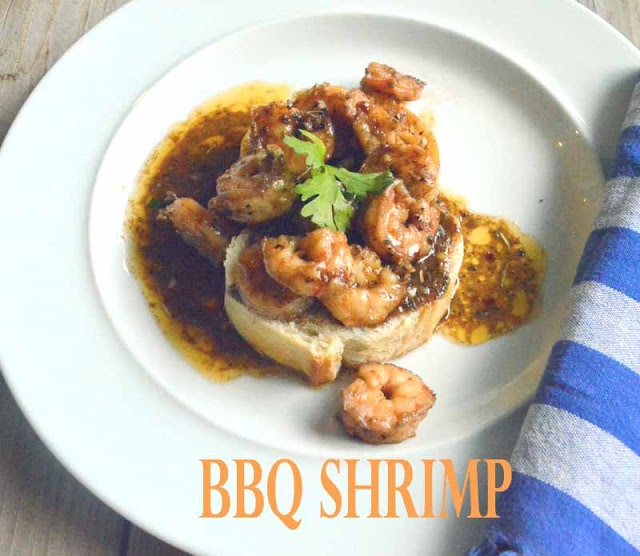 I’m giving you a recipe for spectacular, truly not kosher, barbequed shrimp.

Yes, The challah dough is rising, the rugelach dough is in the fridge and the kadaif is thawing. Plus the chicken soup is in the freezer.

Yeah, it seems strange to me, too. I was raised in a small town with maybe 80 Jewish families, and no one that I know of kept kosher. My grandparents to my knowledge, never ate pork or shellfish and probably wouldn’t have thought to mix milk or meat, but they didn’t keep kosher.

My grandfather became a butcher when he came to this country and began a grocery store, but he never slaughtered his own meat, though he sure was known for it. Everyone loved my uncle and papa’s stores and their meat was renown. That is what I know.

Shrimp d’Jonghe or shrimp with garlic butter, was available at all the quaint restaurants on the Kankakee river, along with catfish, and frog legs. Maybe it was there?

In any case, I never really understood the kosher concept until I became friendly with a family from Israel when we were both studying in Fort Collins.

They adopted me in the second family sense, and I was very happy to be adopted. They are still a part of me and we have been close all these years. So, to say I feel a bit guilty about posting all these recipes that are totally treif, well, I do.

But I am who I am and I eat what I eat and I will happily keep kosher when I am with them. 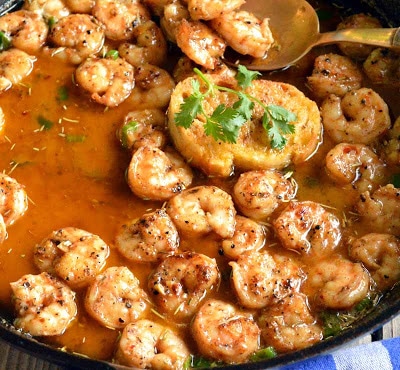 In the meantime I eat bottom feeders. Ouch. Truly, I’ve given up meat so why is it so tough to give up shrimp?

Well, probably because they don’t have pretty brown eyes that gaze at me soulfully. Enough already.

This bbq shrimp recipe is an outstanding, truly rich, totally to die for, recipe. I made it when my in laws were here, because they brought me shrimp fresh from the Gulf. And well, I just had to do something with them.

I love Cajun cooking and my MIL is from Mississippi. Pre kid, the manservant and I used to visit The Big Easy and eat. And eat. AND EAT. Those were the good old days.

This was when Paul Prudhomme was king and in my book, still is. In 1975 he brought back Commander’s Palace to what it is today, and he was the one that hired Emeril to take his place when he opened K-Paul’s. You know – that guy?

If you read Paul’s bio he sounds like quite a colorful character and one that probably would be a lot of fun to hang with. We ate at K-Pauls and we ate at Commanders. And we ate until we got on the plane to come home.

Truthfully, if we hadn’t come home I would have probably found myself in the gutter retching, because my tummy couldn’t have held another bite. Rich food it is. 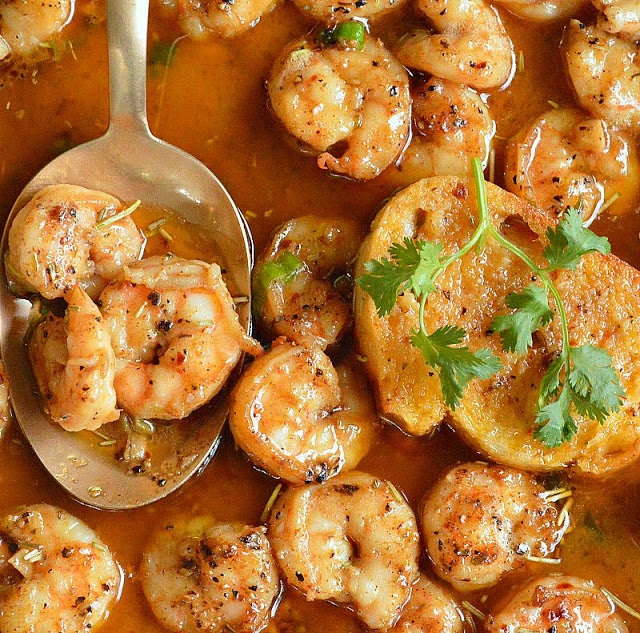 Ever since those 8o’s years, I have cooked from Paul. I have one favorite cookbook of his, Chef Paul Prudhomme’s Louisiana Kitchen, published in 1984, that has many recipes that I truly adore. But barbequed shrimp was one I still had yet to do and so I decided to make this shrimp.

Though they are traditionally served in the shell, I’m not good with finger food. I don’t like foods that need to be nibbled off the bone.

I love cotton candy but I really don’t like even getting my fingers dirty for that. So, I took the shells off and these were still good great. He has the original recipe on his website but I’m going to give it to you the way I did it.

And as Julia Child believed, Paul does, too.  Yeah, butter is a key component to this dish.

I also love potatoes and had never made his potatoes, so I figured it was time. Yeah, rice is the tradition, but well, I love potatoes. They were mighty fine. Mighty fine. 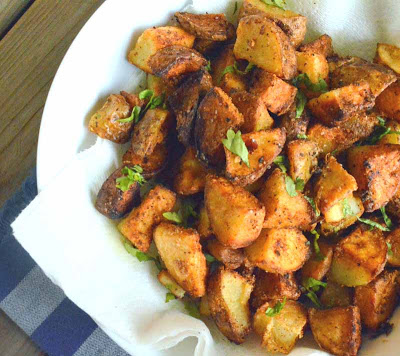 It was hard to share. And so it is that I find myself in the midst of cooking for Yom Kippur, the holiest of holidays and giving you a shrimp recipe.

Please forgive me, G-d. But I did find out that Paul Prudhomme was asked to join the celebration of Jerusalem’s 3000th birthday in 1996 and he was asked to make a kosher recipe for King David’s feast.

I feel redeemed. The problem is that his bio didn’t say what he made. Well, I guess  barbequed shrimp it wasn’t. 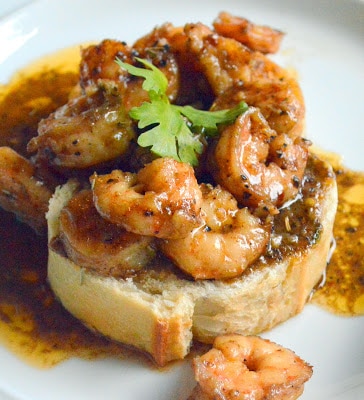 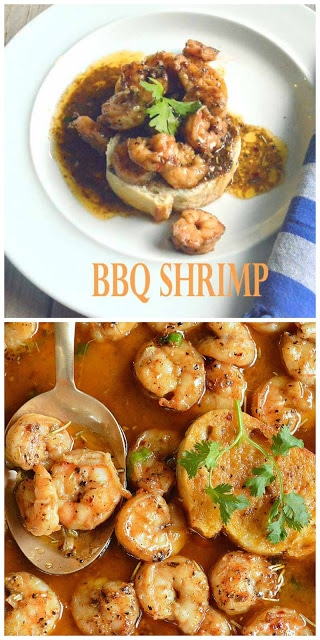 The best bbq shrimp recipe straight from New Orleans. Made in a skillet, not on a grill. These buttery, spicy shrimp are so good!

1 stick plus 2 T butter – in all (Paul says 5)
1 1/2 t minced fresh garlic
1 t Worcestershire sauce
1/2 c shrimp stock (Using the shells from your shrimp, add 1 c water to them. Place in a pot and boil a few minutes until shells turn pink. Let steep while making recipe. Use only 1/2 c)
1/4 c beer at room temperature

In a large skillet, combine 1 stick of butter, garlic, Worcestershire and seasoning mix, over high heat.

When the butter is melted, add the shrimp. Cook for two minutes, shaking the pan, not stirring, in a back and forth motion. Add remaining 2 T butter and the  1/2 c of stock. Cook and shake pan for 2 minutes. Add the beer and cook and shake the pan 1 minute longer. Remove from heat.

Place two slices of bread in center of plate. Spoon 1/4 of shrimp mixture and sauce on top.

I served this with Paul’s potatoes and Emeril’s peanut cole slaw. Oh my.

Wow, I loooove this!!! Coming from Saturday Night Fever, these look great!! I'd love if you'd link up to my link party going on now!

I found your story about keeping Kosher quite entertaining! My best friend growing up was Jewish and kept Kosher. As a Muslim, I keep Halal at home mainly, eat meat out occasionally. Funny thing is, we're allowed to eat seafood, but I don't really care for it! However, shrimp prepared this delicious, spicy way, I can eat those just fine.

Than you, Amy. Great tip, too. I think one reason Paul says to swirl the shrimp or to shake on the burner is so that the sauce stays emulsified. But I like your tip better and will give it a try, soon! You are near some good food. Thanks for commenting!

BBQ shrimp is on my menu for this weekend for my Mom's annual trip here to Biloxi to see me (she's in our home state of Ohio). I was just in NOLA Sunday, and had BBQ Shrimp from Le Bayou Restaurant and it was incredible. I've made it a few times before, using The Frugal Gourmet's recipe YEARS ago, before ever being near NOLA, and more recently, using Paul P's recipe. my problem is, my sauce always seems to break. so I called LeBayou, and actually talked with the chef who made the BBQ Shrimp there. he told me his secret, to take the pan OFF the heat before adding those 'last amounts' of butter, so the sauce will emulsify correctly and not break. I started looking around the internet, and I LOVE LOVE LOVE what you did, with serving it in individual bowls, over a thick slice of bread... beautiful. I will be doing that as well. Thanks for the inspiration!

Thanks for writing Nazneen. I'll bet there are a lot of stories like this! And you are in Broomfield. One day, I'm going to have to do a day of Denver bloggers! I would love to meet all of you!

Wow so much flavour, the shrimp look incredible.

They were Natalie! Thanks!

What an appetizing dish! Your bbqed shrimp is a must-have, Abbe!(with or without potatoes)

It is a good one Denise. And the potatoes are divine! But rice would work, too!

Hi Abbe. I just saw your comment over at my friend's Blog, Cathy, Wives with Knives and saw the Denver reference. I'm a food blogger in Highlands Ranch, always nice to find another local blogger to support. I'm a new subscriber and look forward to getting to know you better.

That's so nice Lea Ann. You are so right as I only know one Denver blogger and now after this post, I know of three. Whoopie! Would love to get to know you better, too!