Buckwheat Waffles with pecans and bourbon not only make a great breakfast; they also can be frozen and served when needed. 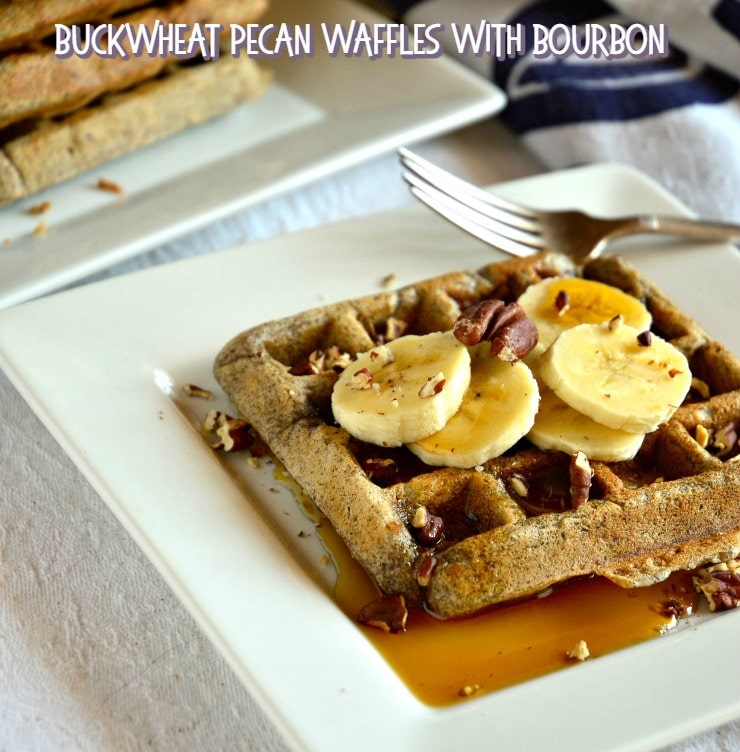 Buckwheat waffles with pecans and bourbon are a new variety of waffle (at least in our house) that we haven’t tried before. Maybe they aren’t a waffle made for kids, but I guess that depends on your kid! These wholesome, pecan laden waffles are easy to whip up and taste great topped with sliced or sauteed bananas. I must admit to also adding about 1/4 c of bourbon to the recipe which gave these fiber filled waffles a real kick. Top these with real maple syrup or even a drizzle of honey and I promise you will have a new taste sensation on your hands!

Waffles are quite popular in our house. Once I pulled the lost waffle iron out from the cabinet above my dryer, and knew where it was, I found myself retrieving it quite frequently. It was when Zoe was a child that we discovered waffles. We often ate at The Original Pancake House where she always ordered a giant strawberry waffle topped with, I swear, a pint of the biggest, freshest, reddest strawberries. Those were “garnished” with a  pint of whipped heavy cream. People would watch this tiny child eat the entire dinner plate sized waffle. She wouldn’t allow her dad to have one bite until the end, when that was all that was left. From then on waffles or chocolate chip pancakes were always a favorite of hers. 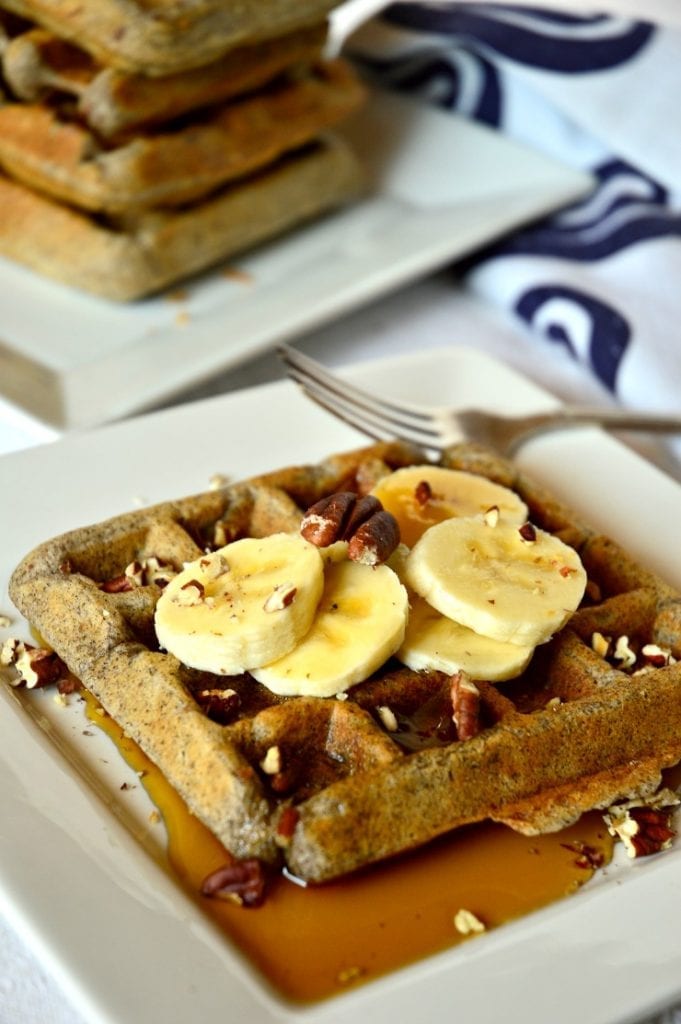 Only a blogger would know that today is national waffle day. Maybe in Sweden where it is widely celebrated you might know, but I only came across this fact recently. Apparently waffles have two national holidays, one of which falls on my children’s birthday in August. Yes, it was then that Cornelius Swarthout of Troy, New York was issued the first waffle iron patent in 1869. I can’t make this stuff up!

So why buckwheat waffles?

Honestly I had buckwheat flour in my pantry that needed to be used. I bought it for something…who knows what…but I decided it was time to put it to good use. Arming myself with a recipe from an old cookbook and adding a few embellishments, I created this great buckwheat waffle recipe. Turns out buckwheat is quite healthy. Besides being perfect for those on a gluten free diet, buckwheat is high in fiber and protein. It is earthy tasting and takes quite well to bourbon, pecans and bananas. Or is it the other way around?

Buckwheat waffles can be frozen, as can most any waffle. Since this recipe makes anywhere from 8 – 12 waffles if your family is not large, you may want to freeze them. Take the frozen waffles out of the freezer and pop them in the toaster oven for about 10 minutes at 325 or you can even toast them in your toaster cycle. Mine come out tasting fresh baked! 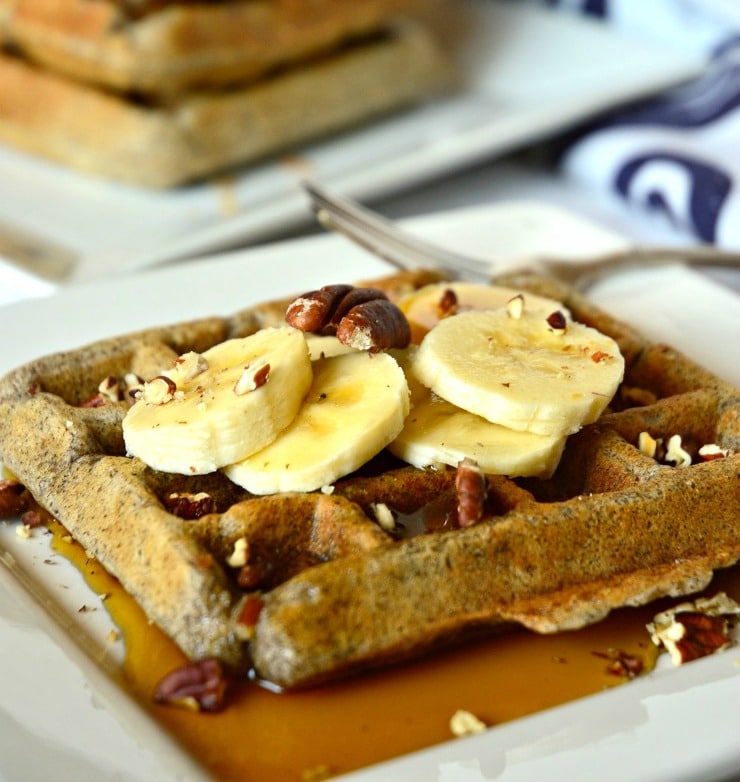 If you don’t have a waffle iron, quit wafflin’ around and go buy one. They aren’t pricey, well mine wasn’t, and I even use it to make grilled cheese and sometimes I throw in a bunch of thawed tater tots and make tot waffles. Those are too good! Check out some of my other waffle recipes. You just might be convinced! 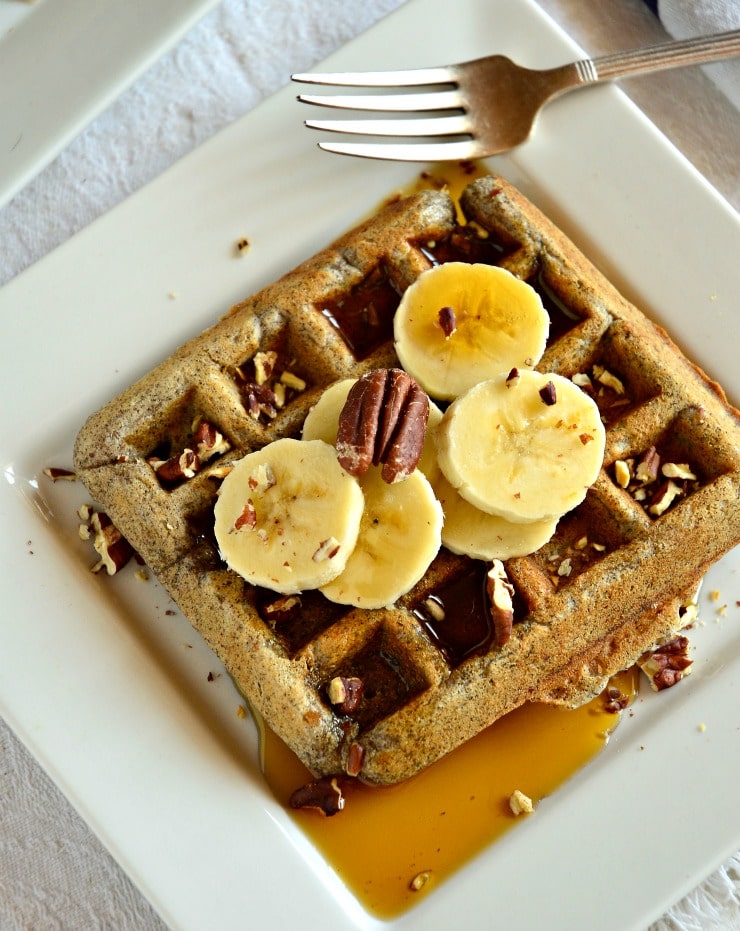 Besides maple syrup you may want to check out these:

Brown Sugar Butter Syrup from Barefeet in the Kitchen

Other Waffles to Try!

And I also have two types of gingerbread waffles on this blog, too! 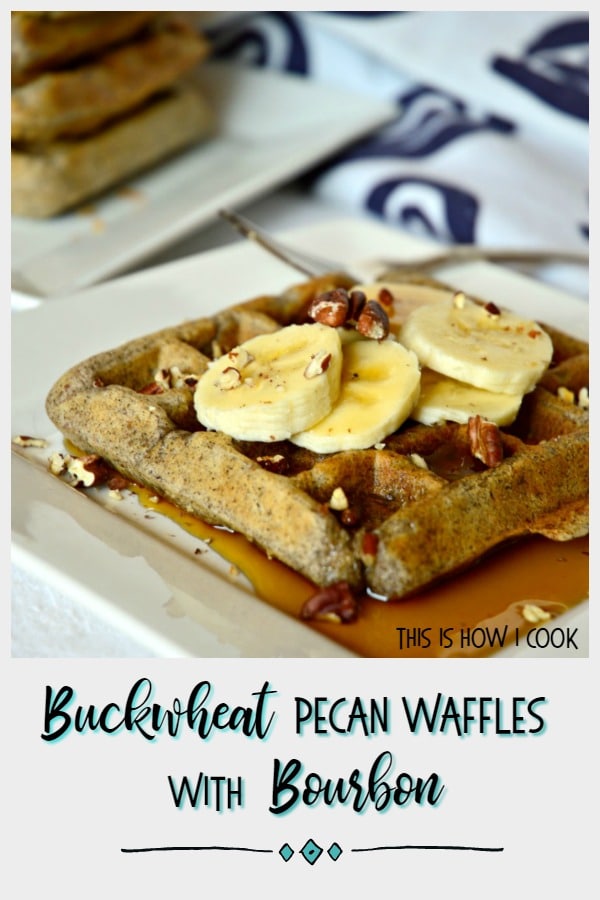 Buckwheat Waffles with pecans and bourbon not only make a great breakfast; they also can be frozen and served when needed.

1 c toasted pecans, coarsely chopped (Put pecans in a pie pan in a preheated 300 degree oven. Heat for about 10 – 15 minutes until you can smell them. They should be golden brown which means they are ready. Do not burn them!)

Spray waffle iron with cooking spray and preheat according to your waffle iron directions.

In a large bowl, combine dry ingredients. Set aside.

In a large measuring 4 cup measuring cup beat eggs until foamy. Add in milk, bourbon and vanilla. Mix well and stir into dry ingredients. Do not overmix.

Stir in melted butter and pecans. For my waffle iron I use about 1/3 c of batter. It is very thick! I cooked these for about 90 seconds until they were golden and the outside was crisp. Waffles can be kept warm in a 200 degree oven uncovered.

I served these with maple syrup mixed with some bourbon. How much is your choice! Bananas are perfect with buckwheat waffles. They are also great topped with almond butter or honey or both! Of course mixing in some blueberries can’t hurt either!

I love buckwheat crepes but never had buckwheat waffles. My husband makes the waffles in our house. I have to show him the recipe.

These look lovely. I can smell them! I lived in southern california during my college years, and kinda got sick of buckwheat. too many vegetarians as friends. but when I make pancakes, even for my grandkids, I always add some buckwheat. It's just a magical flavor.

Oh why oh why don't I have a waffle maker??? These look so good Abbe.

Hearty and delicious and that syrup sounds so inviting. Our family we surely hop out of bed for a stack of these waffles.

I've made buckwheat pancakes but never waffles. These are definitely upscale and perfect for a weekend breakfast!!