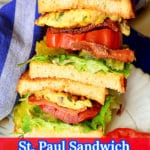 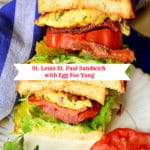 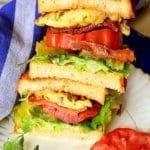 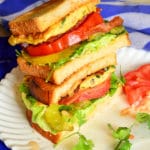 This Egg Foo Yung St. Paul Sandwich is made with an Egg Foo Yung pancake, crisp bacon, tomato and pickles. It originated in St. Louis and is as good as it looks. Perfect for breakfast lunch or dinner! 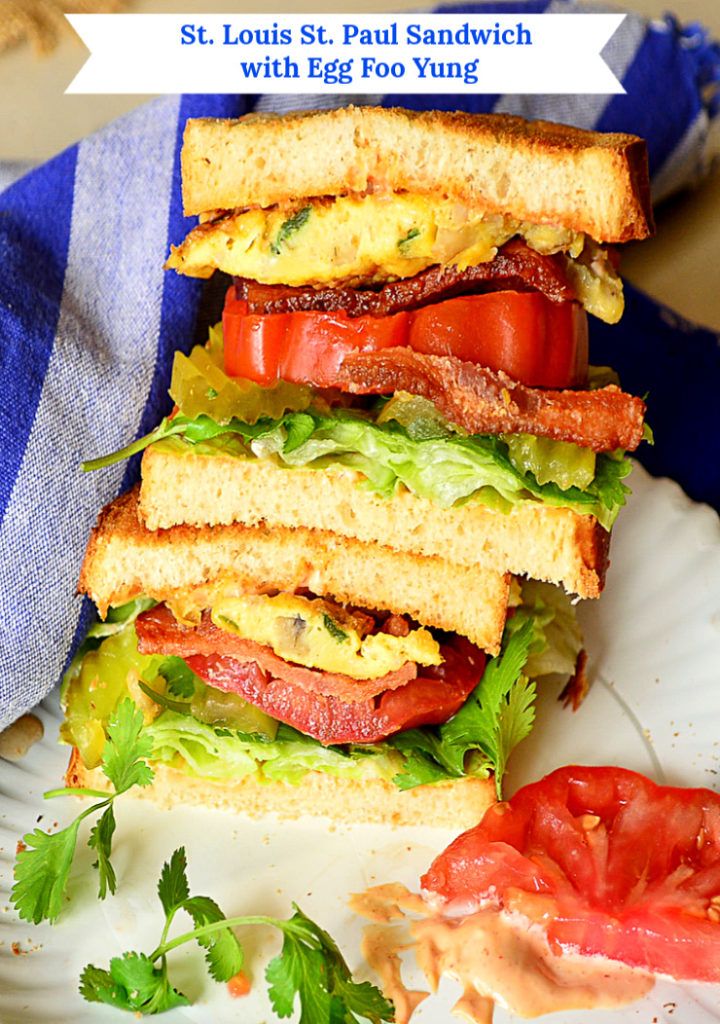 So how is it that a recipe for an egg foo yung St. Paul sandwich, caught my eye?  Yes, I know that’s a big name for a sandwich, but this one is so worth it!

My son even gave me a subscription to the magazine one year; he had found it before me! (Alas, it is no longer.)

Maybe because I’m a big fan of okonomiyaki-a Japanese-egg pancake-or maybe because I like sandwiches that I can call dinner, is one reason I Iove this sandwich.

Manservant really fell for this one, too and I’ve already lost track of the number of times I’ve made this beauty. 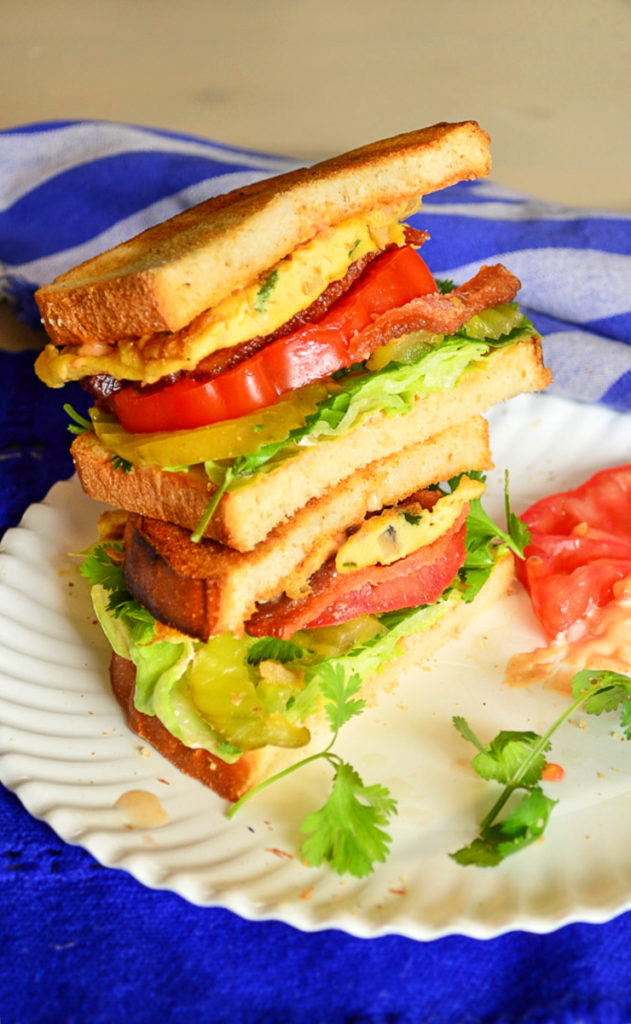 This egg foo yung St. Paul sandwich has an interesting history. Derived from the Chinese immigrants that came here to build the railroad-the big, GIANT, Transcontinental railroad, is when Chinese food made its inroads into America. Quickly Chinese food transformed to Americanized Chinese food.

The story has it that in St. Louis, MO (yes, I know some of you are from St. Louis, so you can verify my “facts”) these little egg foo yung pancakes, (that my mother used to top with a horrid brown sauce  that also contained canned bean sprouts), were somehow, miraculously, placed between two slices of white bread, (probably the squishy kind), and then somehow got attributed to someone from St. Paul, Minnesota.

Apparently the creator of the sandwich named it after his hometown in St. Paul Minnesota, but his restaurant was in St. Louis, MO! Wikipedia states that the sandwich is entirely foreign in St. Paul!

Yes, I am sure that is more than you want to know!

I took several liberties with the classic egg foo yung St. Paul sandwich. First, I toasted my white bread rather than just slapping the egg patty between two slices of squishy white bread. That choice is up to you! 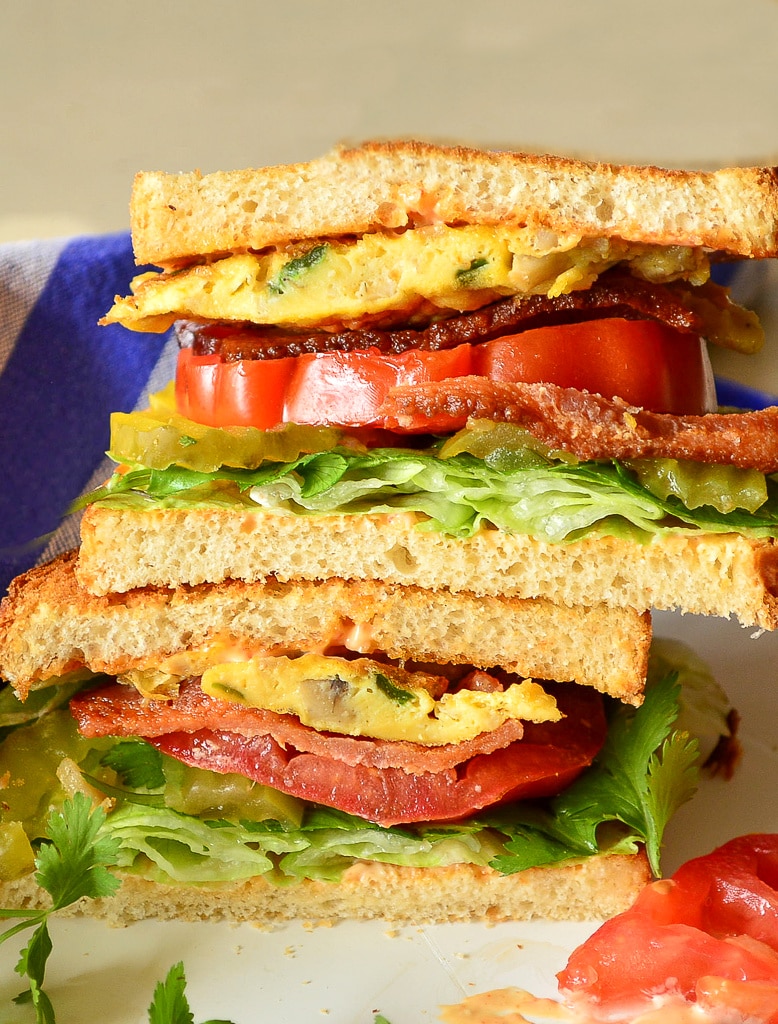 Instead of using plain mayonnaise I amped up the flavor of it by mixing in some soy sauce and sriracha.

Rather than mixing ham or turkey or beef into the egg foo yung patty, I chose to add crisp bacon to my sandwich. Feel free to do both!

Additionally since fresh bean sprouts are hard to find unless I run to Sprouts or the Asian market, I use canned, chopped water chestnuts for crunch. I love bean sprouts, but since they spoil so quickly I usually sub in water chestnuts in any recipe where I can get away with it.

This egg foo yung St. Paul sandwich is meant for a white paper plate and paper napkins. This is diner food at its best!

Growing up in a thriving metropolis like Kankakee, Illinois, didn’t offer many opportunities to eat ethnic food; that is unless you count Italian food or pizza as ethnic.

I believe it has changed and now the big K3 even has Mexican food, however 40 years ago one would have been hard pressed to find a taco, unless it was a prepared shell, in a cellophane wrapper, at the grocery store. 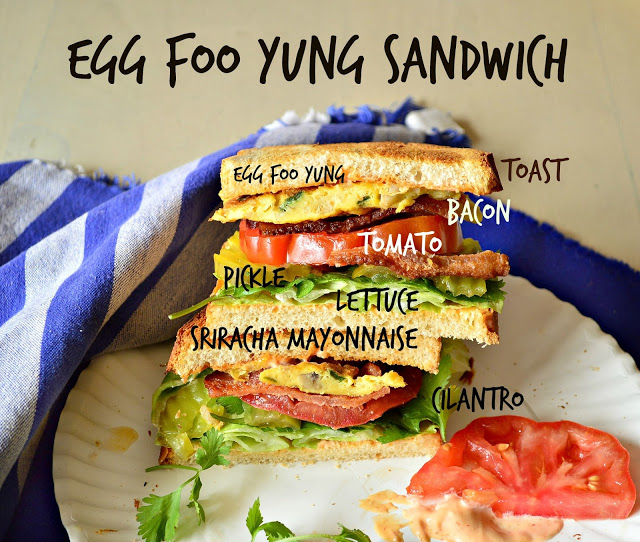 40 years ago Chinese food was the name of the game and I remember driving 30 minutes to eat at a Chinese restaurant on Route 1 in Monee, Illinois; that is if memory serves me correctly.

When I was around 10 years old, Kankakee finally got its own Chinese restaurant, of which my family was a big patron.

I remember us munching on such delicacies as egg rolls and wontons and won ton soup and sweet and sour chicken. You know? The pupu platter!

We were allowed to order allowed  Shirley Temple’s, which was pretty special because they always put a colorful paper umbrella in the tall glass.

But no giant, colorful tiki punches, some even flaming, were allowed at our table; we were too young for those!

And whatever my middle brother ordered, was only for him. No sharing on his part-yeah- I know there is always one of those!

Soon my mother decided she wanted to learn to cook Chinese food and after a grand expedition to Chinatown in Chicago, where she bought the grocery store out, she arrived home with ingredients that had nowhere to go.

She cleaned a cabinet, and started taking cooking lessons from the local Chinese restaurant, while amassing a large library of Chinese cookbooks, some of which I still cook from today.

Thank goodness for the lessons, because up until that point I believe she only made chow mein and egg Foo Yung-both of which we totally despised.

Somehow seeing cans of bean sprouts being opened on the olive green kitchen counter top, was not appealing to me, nor were the chow mein noodles that came in the cellophane bag. 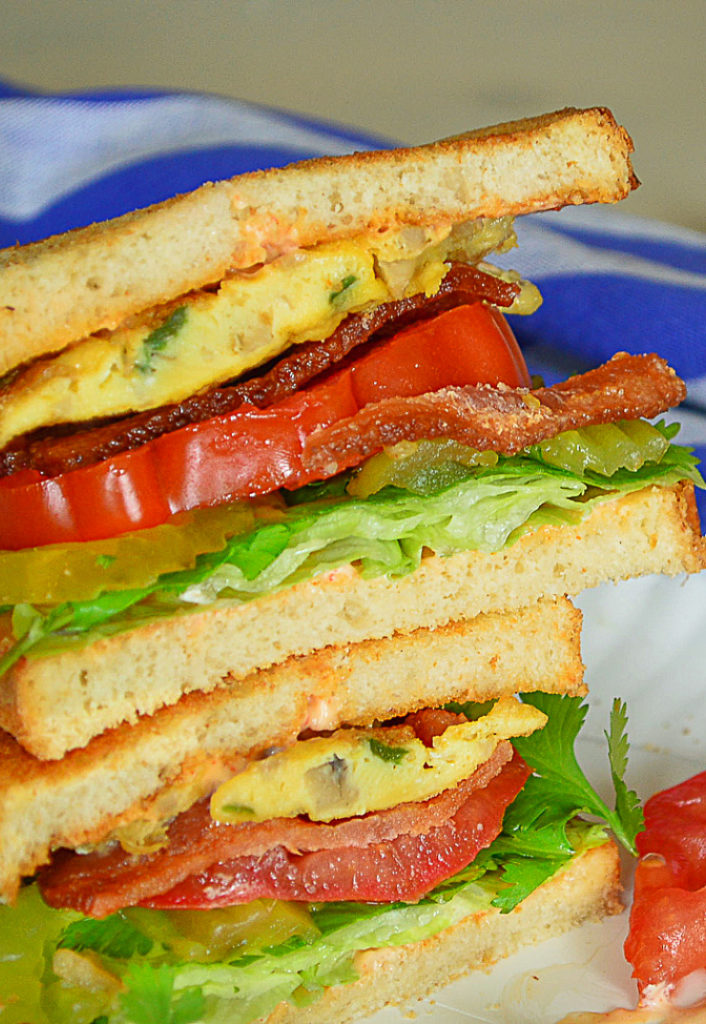 Mom came along way from that olive green kitchen and when she moved to Arizona she even had a built in wok, that I think I saw her use once!

Seriously though, she became quite a good Chinese chef which maybe transferred over to my son!

So there you have it. Chinese cooking full circle. Whether from the Lucky Peach or your own favorite Chinese cookbook, this egg foo yung St.Paul sandwich is a classic example of how a traditional Cantonese dish became a local standard.

I just love food stories like this. Now go make your own version of this egg fu young sandwich. (Yes, there are numerous spellings!) Tell me how it comes out. 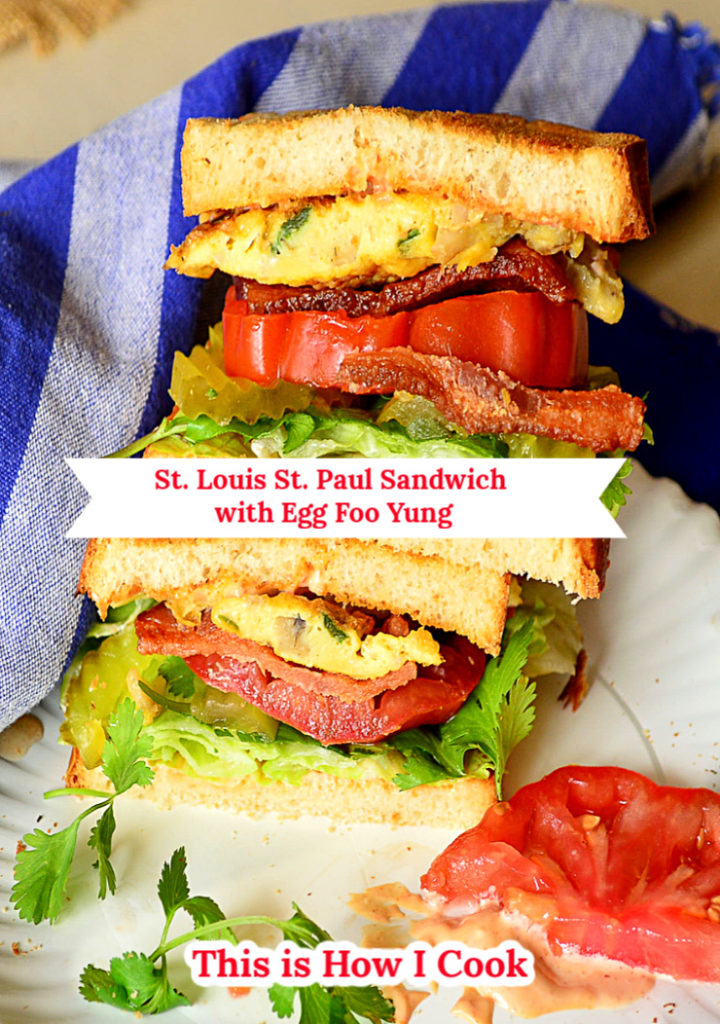 This Egg Foo Yung St Paul Sandwich is made with an Egg Foo Yung pancake, crisp bacon, tomato and pickles. It originated in St. Louis and is as good as it looks. Perfect for breakfast lunch or dinner!

Heat 1 T of oil in skillet over medium heat and cook beansprouts, (if using), scallions and pepper, about three minutes until veggies are slightly wilted. Transfer to bowl and let cool a bit. Season with soy sauce and salt and pepper.

If using ham, chicken or beef, add it to bowl now.

Crack eggs into a large measuring cup and add cornstarch. Beat with a fork to combine. Pour over veggies in bowl and stir until everything is coated with egg.

Reheat skillet over medium low heat and add 2 T of oil. Pour about the equivalent of 4 pancakes into skillet and using a spatula try to contain them into 4″ pancakes. Cook until the edges are brown and set, then flip and cook until pancake is puffed and cooked through out. Transfer to a plate lined with paper towels and keep warm.

My hubby is from the "Lou" and missed this sandwich, so I was thrilled to find this recipe It was delicious and so light yet filling. Thanks

Thanks Denise! So glad you found it and me! Hope he enjoyed this simple sandwich!

This is a hearty and filling sandwich Abbe. Delicious i bet. We only had a fish and chip shop in our little town when we were kids! Run by greeks! Cheers Sherry

Ah! But we didn't have fish and chips. Unless you count Long John Silver's!

This delicious sammie has it all going on! What a fun and delicious invention.

You would love this!

Fun to see this recipe pop up again! It's a good sandwich, although I'm not seeing it that often on restaurant menus these days (well, I wasn't when I could go to restaurants, which for the time I can't, alas). So I guess I just need to make one of these, right? :-)

This looks amazing, Abbe! There's just nothing better that a great sammie filled with delicious ingredients like this... We'll be trying it soon!