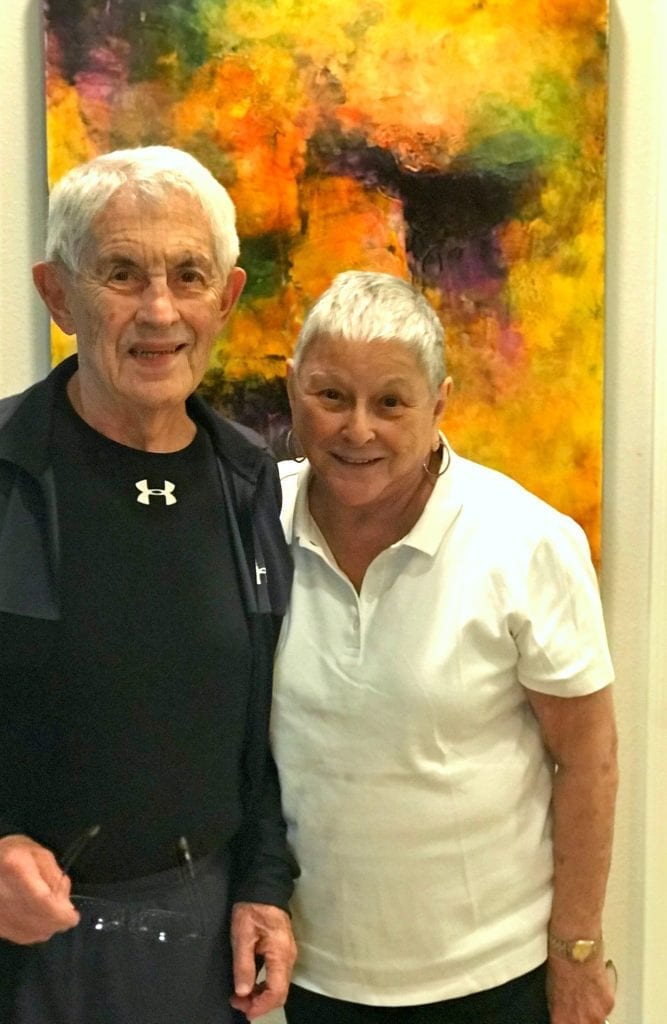 I’m Abbe, Bernie’s oldest child. It’s a very humbling experience to be here today and stand before all of my father’s friends. And my brother’s friends. And my mother’s friends and now
hopefully our friends too. It has been an honor to meet many of you as you have come to visit my dad and keep my mother’s spirits up. I thank you for all you have done for my family. Your words and hugs and prayers have kept us going and sustained us through these hard few months.

As I look around, I can’t help but wonder what my dad would think. I think after he shook everyone’s hand and gave you a hug and asked you what’s new, he would probably look over at my mom and say, “Libby, do we have enough wine glasses for everyone?”My father came to this country in 1938 from a tiny village in Lithuania at the age of 6 1/2. He was born in 1931 and was named Baruch. Baruch means blessed in Hebrew and I’m sure my Bubby knew he was the minute my dad showed his cute little face with a giant head of black curls. Baruch became Bernard, who became Bernie, when with his sister Shirley, brother Art and his parents in tow, my dad the middle child, was ready to conquer America. Landing at Ellis Island, 81 years ago in the month of August, Alex Weiner brought his family to Kankakee where my grandmother’s sister lived.

Dad’s family nurtured him with love and always stood by his side. They worked together as a family in the grocery and I’m told by my Aunt Shirley that dad excelled at cleaning shelves, stacking cans and keeping everything neat and orderly. I had to laugh when she told me this because if you ever saw my dad in action he always had to have things tidy. He and Marie Kondo would have been great friends. There was never a dirty dish in our sink. Dad washed every one and I can assure you my mother never had dishpan hands. My dad was the first in his family to graduate college. His family made sure he did it right and between my grandfather and my Uncle Art they managed to send him off with a coral pink Ford
that he used to attract girls, one of which included my mother. Their long love affair began with my mother wearing a pink cashmere sweater, to match his car, and from there they went for a 1 hour Coke date. My mother confessed that she didn’t immediately fall in love with my dad, but she did love all the simple presents he gave to her when they met for Sunday night dinners.

It wasn’t long before Libby Brainin became Libby Weiner and my parents love affair continued for 63 short years. My dad continued to buy my mother simple presents and some not so simple presents throughout their life. However the most important gift I think he gave her was his total attention and devotion each day of her life. My father was so in love with my mother and Dad, I want to assure you that we children, will always be there for her. The night my father died it rained. It didn’t just rain. It poured. As we sat with my dad we could
hear the wind swirling and howling through the night. We could smell the salty sweetness of the rain through the open windows, as it poured and drenched everything in its path. We could hear the thunder as we sat with my gentle dad as he prepared to take his long journey. It was then my dad opened his eyes and searched the room, I think, to take one last look. He did this several times as we watched in amazement. He appeared to have tears on his cheeks and then somehow he managed to kiss my mother. I’m not sure we all recognized the magic at that moment but as I got into the car with my husband and son, I told them that I thought that was his last hurrah. It was. Quietly while my brother and mother slept, Dad left us and ventured into a world we cannot see, but which I believe is there. I’m not sure God needs Dad’s help, but God, I can assure you there is none better.

My dad is the modern day connector. He knew everyone and everyone knew him. Being the middle child allowed my dad to develop qualities that served him well in his later life. According to my most reliable source of information, Google, middle children tend to be family peacekeepers, in addition to being sociable, faithful in their relationships and good at relating to both older and younger people. When it comes to my dad this describes him to a t. Dad had a ton of friends. Aways. From childhood to adulthood, my dad excelled at making friends. People loved my dad. At Sagewood, dad continued working his magic and one day while I was there his friend Larry, a driver at Sagewood, pulled me aside and gave me a wonderful gift. He told me that dad always had a way of making him feel important even though he was just a driver. Just? No one was ever just just to my dad. My dad respected and nurtured every relationship he had. I will never forget that to my father, people are people and he never judged by your skin, or your rank, or your worth.

Dad’s first friend is here today and I don’t know about you but I can’t even remember my first friend, though I always knew my father’s. Every year my dad took us to see the talking pumpkin and every year he helped his first grade friend set up his Christmas tree. And then he’d come home and say, I’m so glad I’m Jewish. I hate cleaning up all those pine needles. But every year he’d do it again. Lots of my favorite childhood memories were because of my dad’s first grade, life long friend.

My dad’s friends were from all over the map. To Bill, whom my dad often gave rides to as he roamed the wild Kankakee streets…well Bill also cut our lawn and painted our basement, and months later my dad discovered Bill also enjoyed the wine that had been aging in the basement room that Bill had painted. But, he never stopped driving Bill around. And then there was George Morrow. George was black, and when Kankakee High School ran out of lockers for everyone my dad didn’t hesitate to share one with George. George became one of my dad’s friends and in later years his grateful father often came to our home to help my dad with any odd jobs since my dad’s tool box only contained a screwdriver, hammer and
wrench.

When he moved to Phoenix, Dad gained more friends and now look at all of you. If life is measured in friendship than Dad’s cup overflowed. As I grew up our family grew. Dad’s mom died at a young age and shortly thereafter my grandfather remarried. We not only gained a new grandmother, but my dad gained a new brother. They had a very special bond and I’m happy to say that I also gained two cousins that I don’t see enough of.

It was hard to be Bernie’s child, at least for me. Dad always told me to do my best, and then when I did, he’d still ask if I studied enough. I could never win. Truth is though years later I
realized I hit the jackpot when it comes to fathers. Not only did I get one who loved me and cherished me and taught me how to be a kind human being, he gave me a belief that people are good. He taught me to be proud that I’m Jewish and to be proud of everything that I am. Dad taught me to be proud of our country and to always support Israel. He taught me to never back down when I’m right and to stand up for what I believe in. He taught us that in life, you don’t always have to be right, but you have to do what’s right. He taught me that if you love what you do, it is never work. He taught me to always be learning and that an education can never be taken away. He taught me that life isn’t fair and he taught me that life is to be lived and that each day is a new day and according to my brother Mark, he said one should only cry tears of joy, which sounds like sound advice to me. Dad you have given us all a path paved with goodness and for that I am grateful.

Shalom, peace and until we meet again. I love you Dad.